There are some authors who make me want to read forever.


There are some who inspire and haunt me so that I want to write myself into oblivion. And then there are those who make me feel like I should never ever ever presume to give permanence to any string of words ever…

Recently, a dear word-loving friend and I headed off to spend an evening engaged by just such a writer. We went to listen to the splendiferous David Sedaris reading his own work.

Like a couple of book-moles, or should that be authories? I’m not sure what the appropriate term is… book-skanks? Anyway, like a couple of stalker-chick fangirls we had snagged seats close enough to see the details of the pattern of his voluminous plaid culottes and his perky genuine tie-it-yourself bow tie — close enough even to run the possibility of accidental annointage by flecks of his oh-so urbane spittle.


We got there early.


We took selfies inside the theatre. 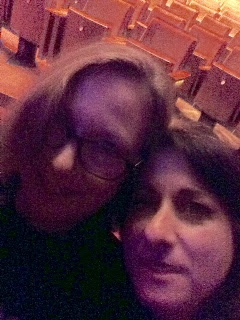 Indeed, an indecorous amount of giggling may or may not have been involved. Nervous tension. Excited apprehension.


And perhaps just a glass or two of champagne.


A sweet young thing of an usher politely reminded us that the taking of photos during the show was strictly forbidden. We pondered asking her to take a photo of the two of us that didn’t show up extra chins, or over-sized honkers or lack-of-decent-sleep dark circles, but we didn’t want to scar the poor love for life. Besides, she didn’t have time to take the hundred-or-so shots that our requests would have necessitated.

It was a magic night. David was sublime.


At several points, I thought my companion was going to swallow her own lungs. Stopping the laughter in time not to miss the next peerless observation about life and family can be tricky. Occasional snorts were unavoidable.

David Sedaris is one of those authors who puts words together in such perfect order that he shuts me up entirely. He sees the immensity of minutiae and magnifies it even more notably through his wit and lexicon.

Wendy of the Rock