I think I broke my mother. Well, not broke her exactly. Maybe cracked her a bit.  Corrupted her a wee tad. And it’s all because of my penchant for bad language. 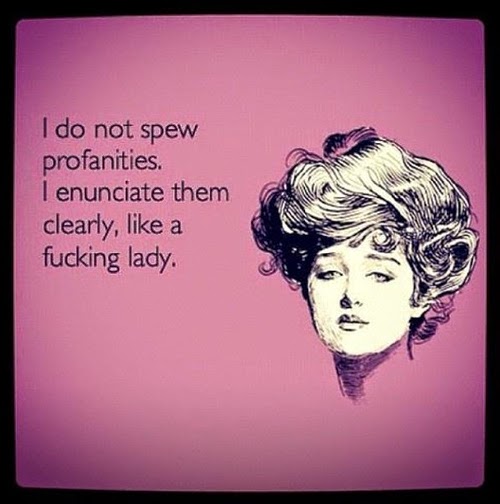 I say fuck a lot. I say fuck a real lot. In fact, I say fuck so fucking often that my mother has become desensitised to hearing me say it. She no longer tut-tuts, or reminds me to watch my mouth. She doesn’t give me a disapproving look. She doesn’t even flinch. You know how there’s been about fifteen million pieces of research into how constant exposure to brutally graphic computer games and death metal causes teenage boys to become indifferent to violence? Well, it’s like I’m the Postal 2 of language and she’s Justin Bieber. Truly. These days, sometimes she even SAYS fuck.


When I was growing up, our household was the quintessential middle-class suburban family. No swearing was tolerated. I distinctly remember being dragged to the pink pedestal basin when I was eight or nine to have my mouth washed out with soap. I don’t recall what I said. It might have been shit. Or bugger. It might even have been shut-up — back in the 1960s  shut-up was considered offensive language. But it most certainly would not have been fuck. Fuck came much later. If it’d been fuck I might have had to eat mustard.


We had a swear jar too. For years we all had to pay a fine every time we dropped a swear word in the house. Even Dad. If I implemented one of those in my house, we'd be neck deep in gold coins in no time.

There were also words that were not cussing or blasphemy that were forbidden. Mum couldn’t abide the word fart, for instance. It was vulgar. Crude. Unacceptable. It was right up there on her Top 10 Things Never to be Said. Or done. Actually, it was probably in the Top 5 Never to be Done. Although she did let one slip one time. Just the once.


She was clearing the table, carrying the dirty plates to the sink. She had her back to us. She must have. Because I can remember staring at the bow that held her apron tight. My brother and I were too shocked to laugh. It was as if the Queen had ended her Christmas message by mooning the Commonwealth. Unthinkable. But she didn’t acknowledge it in any way. There was no pardon me for the fluff/bottom burp/ pop-off (all of which terms could be used free of charge). She just pretended it never happened.


I discovered that other families outlawed particular words too. One mother I met disallowed the word stupid. Seriously. The designated replacement word was silly. How fucking ridiculous is that?


I guess it was probably while I was at uni that fuck became part of my daily lexicon. Ironic really. The more I studied language, the worse mine became. But I’m living, walking confutation of the theory that people who swear have a poor vocabulary thus are unable to express themselves any other way. I’m proof that it’s not only the uneducated who drop f-bombs into everyday sentences. And I make no apologies for it.

But I am sorry that I broke my mum. Really I am. She used to be such a nice little lady before she met me.

Wendy of the Rock